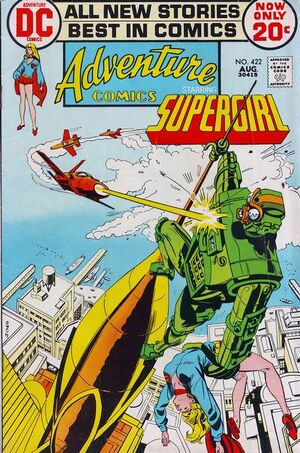 Appearing in "Pawn of Peace"Edit

Synopsis for "Pawn of Peace"Edit

Two alien invaders with the power to make themselves look like Earthmen pose as scientists from a "peace committee" and pay a visit on Professor Axel. Axel has spent ten fruitless years trying to make a giant warrior-robot work. The aliens lend a hand and animate the robot with their superior technology. But they use it as a weapon, to wreak havoc in San Francisco. Supergirl battles the robot, but its power exceeds her own and it grabs her in a crushing grip. Professor Axel, trying to short-circuit his creation, is crushed by its mighty hand. Supergirl

finally hits on the idea of irradiating the robot's "brain" with her X-ray vision. This disrupts the robot, and it crashes inertly to earth. Supergirl becomes Linda Danvers again and gets bawled out by Geoff for missing the robot story, and undercut by Nasthalia, who takes Geoff to lunch. Meanwhile, the alien invaders have taken on the shape of Russians, and are paying a visit to a Soviet scientist who has been trying to get his own giant robot to work.

Appearing in "Rodeo of Death"Edit

Synopsis for "Rodeo of Death"Edit

An attempted murder at a rodeo leads the Vigilante into a case wherein a black cowboy is threatened by a racist organization.

Retrieved from "https://heykidscomics.fandom.com/wiki/Adventure_Comics_Vol_1_422?oldid=1400031"
Community content is available under CC-BY-SA unless otherwise noted.