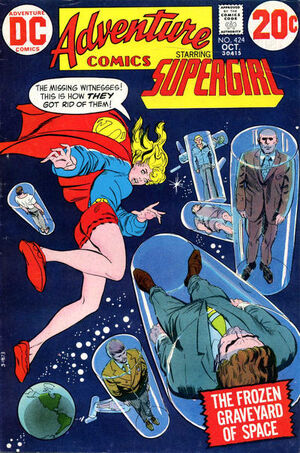 Appearing in "Crypt of the Frozen Graves"Edit

Synopsis for "Crypt of the Frozen Graves"Edit

Linda Danvers has been getting information on the Frisco Syndicate from former gangster Bruce Ryan, but Bruce is scared into hiding by mob attempts to kill him. Linda herself has been getting flak from Geoff and Johnny at work about her camera operation due to Nasty's machinations, but gains praise for her reporting. Later, Bruce gets killed by a gunman who appears and disappears as if by magic. When Linda learns that Nasty may have been giving information to the mob about Bruce to frustrate her reporting efforts, she physically attacks her and has to be restrained by Johnny and Geoff. Supergirl finally tracks down the Frisco Syndicate, who have been using a scientist's teleportation device to send in assassins and dispose of witnesses in space capsules. After jailing them, Supergirl returns to her Linda Danvers identity, goes to KSF-TV, and angrily resigns.

Retrieved from "https://heykidscomics.fandom.com/wiki/Adventure_Comics_Vol_1_424?oldid=1503926"
Community content is available under CC-BY-SA unless otherwise noted.