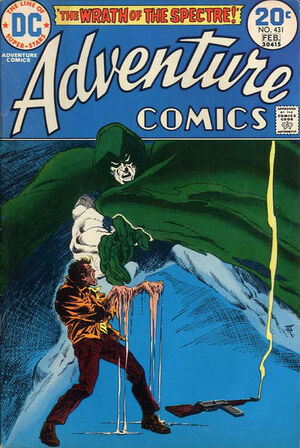 Stare deep into my eyes, evil one -- and we will walk into the valley of death together!

Appearing in "The Wrath of... the Spectre"Edit

Synopsis for "The Wrath of... the Spectre"Edit

An armored car robbery results in four guards dead and three crooks escaping. Lt. Corrigan from homicide is put on the case. He follows a lead to an antiques dealer who happens to be part of the heist gang. When Corrigan confronts him, the thug panics and pulls a gun. He then flees his shop, taking the money. As he drives off, Spectre follows him. The thief pulls over and calls his buddy from a pay phone, confessing he's scared because a "spook" is after him. After the call, he jumps in his car again. Moments later, the Spectre appears, larger than life, causing the driver to go off the road and plunge over a cliff. One down, two to go.

The Spectre visits the next thug in his hideout. This time a machine gun his pulled on him, but Spectre only melts it away, along with the man's arms... and slowly the rest of him, until he is only a bubbling flesh form on the floor.

The third convict believes he is safe on a plane to South America, however, Spectre boards, and flips out the lights. When the lights finally come on again, the passengers gasp at the sight of a skeleton crumbling in the aisle.

The three murdering thugs have all perished by the wrath of the Spectre.

Retrieved from "https://heykidscomics.fandom.com/wiki/Adventure_Comics_Vol_1_431?oldid=1502325"
Community content is available under CC-BY-SA unless otherwise noted.