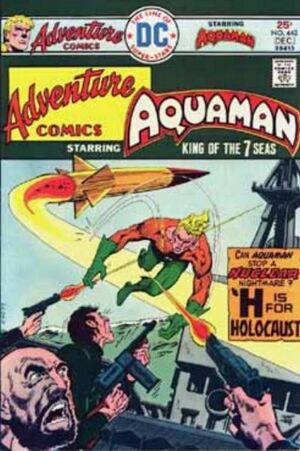 I'm going to give him a piece of my mind -- and maybe my fist!

Appearing in "H Is For Holocaust"Edit

Synopsis for "H Is For Holocaust"Edit

A cargo ship holding radioactive material is hijacked by a terrorist group, the New Order, and NATO General Horgan decides to have it bombed before it can reach its destination. The bombing would scatter nuclear waste over Atlantean farmlands, so Horgan contacts Aquaman to have him evacuate the area. Rather than lose the farmlands, Aquaman opts to intercept and disable the NATO missile himself, and then attacks and defeats the terrorists. At the same time, a faction of Atlantean politicians is beginning to speak up against Aquaman’s rule.

Retrieved from "https://heykidscomics.fandom.com/wiki/Adventure_Comics_Vol_1_442?oldid=1498228"
Community content is available under CC-BY-SA unless otherwise noted.