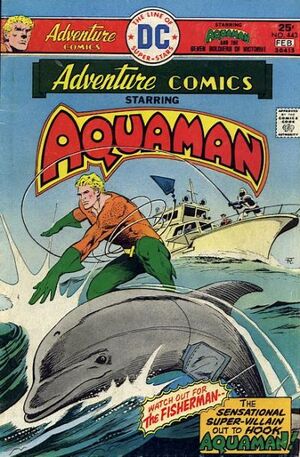 Not even a man who can breathe air and water can hope to survive -- in a vacuum!

Appearing in "The Dolphin Connection"Edit

Synopsis for "The Dolphin Connection"Edit

On his way to see General Horgan, Aquaman stumbles across a heroin-smuggling operation using dolphins as couriers. This leads him to the mastermind behind the plot, his old foe, the Fisherman, who captures him and strands him in a chamber being emptied of air. Aquaman signals his octopus Topo to break him free of the chamber, then defeats the Fisherman. But in Atlantis, a vote has been taken, and the rulership has been given to a man named Karshon.

Retrieved from "https://heykidscomics.fandom.com/wiki/Adventure_Comics_Vol_1_443?oldid=1400056"
Community content is available under CC-BY-SA unless otherwise noted.