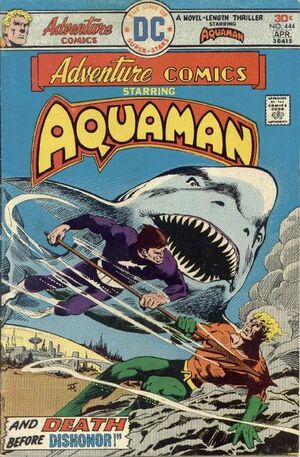 I couldn't turn my back on the world -- I was a super-hero long before I was a King.

Appearing in "And Death Before Dishonor"Edit

Synopsis for "And Death Before Dishonor"Edit

Aquaman is forced by the Ocean Master to go to Atlantis and get Serum X, which can change air-breathing humans to water-breathers, and deliver it to him, or his fleet will destroy Monaco. When Aquaman arrives in Atlantis, he is attacked by soldiers and brought to Karshon, who informs him that he has been elected ruler in place of Aquaman. Karshon refuses to give him Serum X. Mera, in private, suggests he steal Serum X from the place in which it is kept. He almost does so, fighting Karshon and Karshon’s pet shark to gain admittance, but finally realizes that the ends do not justify the means. Aquaman leaves without the serum, uses the denizens of the sea to cut Ocean Master off from contact with his fleet, closes with Ocean Master, and defeats him in combat. When Ocean Master attempts to fire three missiles at Monaco, Mera stops them with a hard-water shield. Later, Mera, Aquaman, and Aquababy take stock. She informs him that Prof. Vulko has decided to stay in Atlantis. But Aquaman has been framed, falsely, for stealing Serum X. Aquaman vows to find out who is framing him, and Mera promises to help him.

Retrieved from "https://heykidscomics.fandom.com/wiki/Adventure_Comics_Vol_1_444?oldid=1498222"
Community content is available under CC-BY-SA unless otherwise noted.