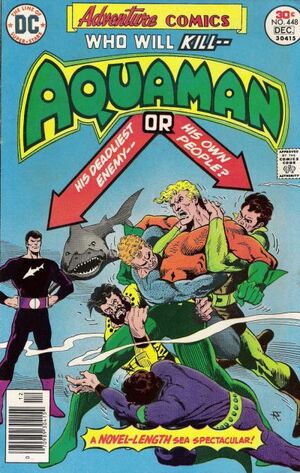 I'll kill you for this, Shark... today, tomorrow or ten years from now -- but I'll kill you!

Appearing in "Crown, Crisis and Cataclysm"Edit

Synopsis for "Crown, Crisis and Cataclysm"Edit

Aquaman finds his wife and son gone from his new headquarters, and he is captured by the Black Manta, who has been waiting for him there. He learns Karshon accused him falsely of stealing Serum X to sell to corporations in the surface world, when Atlantean guards bring him before Karshon. Aquaman breaks free and battles Karshon, who finally transforms himself back to his normal identity...that of The Shark, one of Green Lantern’s deadliest foes. The Shark shows him a trapped Mera and Aquababy, menaced by sharks in a tank, and declares that his objective has always been to hunt “the most powerful prey”. Since Superman and Green Lantern defeated him with “secrets I couldn’t know”, he has turned to hunting a sea-dweller, Aquaman. Now, with Aquaman’s family as hostage, the Shark begins a hunt with Aquaman as prey, promising to free his family if the sea king can evade him for an hour. Aquaman is wounded during the hunt, but lures the Shark to a nuclear waste dump, where the radiation reverses his mutation and he becomes a normal shark once again.

Retrieved from "https://heykidscomics.fandom.com/wiki/Adventure_Comics_Vol_1_448?oldid=1498258"
Community content is available under CC-BY-SA unless otherwise noted.