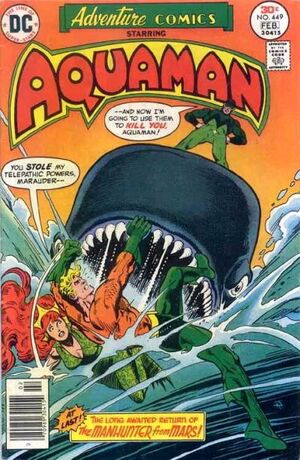 The only Earth people who know where we are, or who are capable of traveling to this world are my former colleagues in the Justice League! While I cannot understand why they would do such a thing, I can think of no other possibility. One of them is the killer!

Appearing in "The Menace of the Marine Marauder"Edit

Synopsis for "The Menace of the Marine Marauder"Edit

A new villain, the Marine Marauder, appears, with the power to control air-breathing sea creatures by radio waves from transmitters concealed in his costume. The Marauder uses a school of whales to help him hijack a vaccine shipment at sea. Aquaman and Mera are called in to stop a second hijacking, but fail. However, the Marauder’s radio waves produce a signal that can be tracked by a ship’s sonar, and Aquaman uses this to help him locate the Marauder. The Marauder manages to escape, but Aquaman retrieves the vaccine. Meanwhile, in Atlantis, Aquaman and Aquagirl are confronted at gunpoint by Mcann, who accuses Aquaman of stealing his son.

Appearing in "Mission: Catch a Killer"Edit

Synopsis for "Mission: Catch a Killer"Edit

Just as J'onn J'onzz is awarded leadership of Mars II for a second term as popular vote, his friend R’es Eda is cut down and apparently killed by a sniper. Eda’s last words were "was from...was...sol...", which J'onzz interprets as meaning the killer was from Earth, a world circling Sol (Earth’s sun). Since no one there except the members of the Justice League knew where Mars II was located, J'onzz suspects that, like it or not, one of them may be involved in the murder. Though N'or Cott and other Martians try to stop him from leaving Mars, J'onzz steals one of Mars’s two spacecraft and heads for Earth, with N'or Cott in pursuit.

Retrieved from "https://heykidscomics.fandom.com/wiki/Adventure_Comics_Vol_1_449?oldid=1500601"
Community content is available under CC-BY-SA unless otherwise noted.