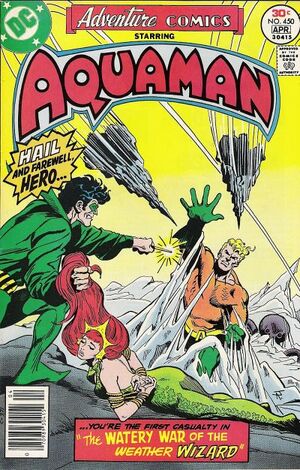 That's right, clown -- run, for all the good it'll do ya! Just remember that a single misstep, one careless stumble -- and you're fried!

Appearing in "The Watery War of the Weather Wizard"Edit

Synopsis for "The Watery War of the Weather Wizard"Edit

The Weather Wizard uses his weather-altering wand to hijack a plane which is carrying an experimental vibrational device he intends to use on the Flash, bringing it down in mid-sea and keeping the ocean away from it by creating an artificial tidal wave. Aquaman and Mera investigate, and, after a brief battle, Aquaman defeats the Wizard by reflecting his wand’s power back at him. In the meantime, Aqualad defeats Mcaan. But, since Mcaan holds the key to Aqualad’s unknown past, he opts not to take him to the Atlantean police, but to go back with him in order to uncover his heritage.

Appearing in "Return to Destiny"Edit

Synopsis for "Return to Destiny"Edit

Just after J'onn J'onzz breaches Earth's atmosphere, his ship is blasted by N'or Cott, destroying it, dazing him, and drawing the attention of Supergirl. The Girl of Steel is mistakenly drawn into battle against the Martian Manhunter until she brings him back to his senses. When N'or Cott releases two more torpedoes, Supergirl intercepts and destroys them. J'onn stops her from pursuing Cott, saying that their attacker "is merely doing his duty." But he tells her that somewhere on Earth is R'es Eda's murderer, and he is bound to bring him to justice.

Retrieved from "https://heykidscomics.fandom.com/wiki/Adventure_Comics_Vol_1_450?oldid=1400070"
Community content is available under CC-BY-SA unless otherwise noted.