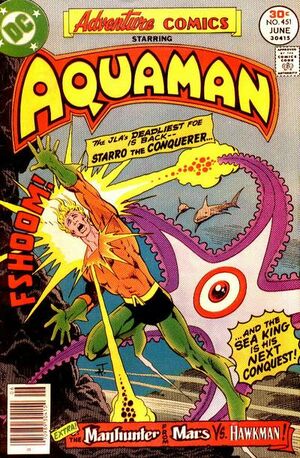 Give it up, Starro! Because without your power -- you're about as much of a threat -- as a patch of day-old seaweed!

Appearing in "The Secret of the Sinister Abyss"Edit

Synopsis for "The Secret of the Sinister Abyss"Edit

Hunting for his octopus Topo, who has inexplicably kidnapped Aquababy, Aquaman and three purple-eyed Wanderers from another area of the undersea run into Starro the Conqueror, old foe of the Justice League. Starro reveals to Aquaman that, when he initially landed in Earth’s seas, he left a small part of himself behind, to generate into a full-sized Starro should he fail in his campaign against Earth. The remnant’s powers to comply were not great enough, however, until pollutants entering the area of sea it was in strengthened it and allowed it to become a new Starro. To combat it, Aquaman commands a mass of fish to swim in and bring with them fresh water to inundate the starfish villain. With his power sapped by the dilution of the pollutants, Starro finds himself no match for Aquaman and is defeated, and later carted away by Green Lantern.

J’onn J’onzz, having eliminated Superman and Green Lantern from his list of suspects, confronts and attacks Hawkman and Hawkgirl in their Thanagarian spaceship and accuses them of R’es Eda’s murder. Hawkgirl rescues her husband and J’onzz from dying in airless space, and they prove their innocence to J’onzz, who apologizes. But N’or Cott has equipped a Superman robot with a bomb and sent it towards Hawkman’s ship, and it is admitted inside.

The Martian Manhunter storyline is concluded in World's Finest #245.

Retrieved from "https://heykidscomics.fandom.com/wiki/Adventure_Comics_Vol_1_451?oldid=1500586"
Community content is available under CC-BY-SA unless otherwise noted.