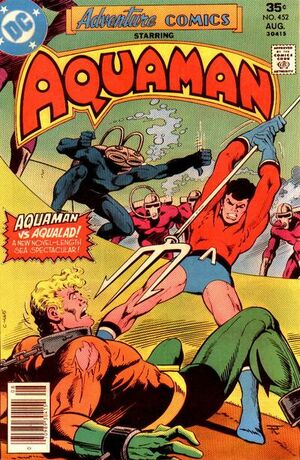 No, I mean exactly what I said: "my people." Or have you never wondered why I'm called -- Black Manta --? Not that racism is my motive -- there's no profit in prejudice -- but since blacks have been suppressed for so long on the surface, they fight well for a chance to be "masters" below!

Black Manta and his gang have taken control of the Idylists’ city and have captured Aqualad. Before long, they add Aquaman and the Idylist trio sent to find him to their catches. In prison, Aquaman learns from Mcaan that Syan, his young, purple-eyed son, ran away years ago, and he mistakenly thought Aqualad could be his son. Black Manta, who reveals himself to be an African-American out to make himself and his gang “masters below” (of the undersea kingdoms), controlled Topo with a telepathic device, and now has Aquababy in a globe filling with air. The water-breathing baby will suffocate within five minutes unless Black Manta presses a control in his hand, and he refuses to do that until Aquaman and Aqualad engage in gladiatorial combat with tridents and one of them lies dead. The two heroes do begin battle, since Aquaman feels there is no other alternative. But after a few blows are dealt out, Aquaman deduces that Topo can still follow his commands, and breaks off the fight, causing the octopus to destroy Black Manta’s control box. Aquaman hurls his trident at Aquababy’s glass prison and shatters it. But the action comes too late. Aquababy is dead. Black Manta gets away in the confusion. When the grieving Aquaman tells Aqualad that they can catch him if they try, Aqualad sadly refuses. He realizes the reason why his mentor tried to kill him, but it has still changed things between him. He opts to stay and help Mcaan find his son. Bitterly, Aquaman sets off in search of Black Manta and revenge.

Retrieved from "https://heykidscomics.fandom.com/wiki/Adventure_Comics_Vol_1_452?oldid=1526891"
Community content is available under CC-BY-SA unless otherwise noted.