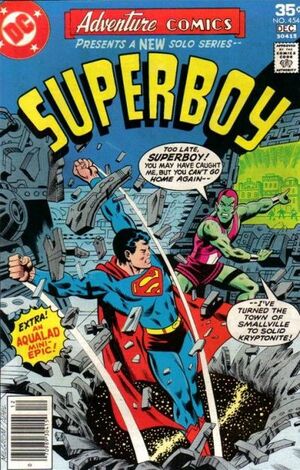 What's to explain, Thoran? The Idylists killed my father... and now I'm going to return the favor!

Appearing in "How Green is my Home Town?"Edit

Synopsis for "How Green is my Home Town?"Edit

When everyone in Smallville turns green and begins radiating Kryptonite wavelengths, Superboy heads for space and tracks down the Kryptonite Kid. The Kid traps Superboy in his spacecraft and, though he denies involvement in the Smallville situation, tries to kill the Boy of Steel with his power. But Superboy manages to head the spacecraft towards a red sun, whose influence steals his power and thus his weakness to Kryptonite. He knocks out the Kid, then brings himself into a yellow sun system, vaults out, and heads for Earth.

Appearing in "Sins of the Father"Edit

Synopsis for "Sins of the Father"Edit

Aqualad kills a shark which he thinks is attacking an old Atlantean. But the old man explains that the sharks are his brothers, and he has been living in exile ever since he killed the king of Hidden Valley, Thar. Aqualad sees a picture of Thar, and believes, thanks to a striking resemblance, that he could be his lost father. He returns to Hidden Valley and tries to extort the truth from Thoran, but gets nowhere. Angrily, Aqualad promises he will seek vengeance for the Idylists’ supposed murder of his father.

Retrieved from "https://heykidscomics.fandom.com/wiki/Adventure_Comics_Vol_1_454?oldid=1509408"
Community content is available under CC-BY-SA unless otherwise noted.