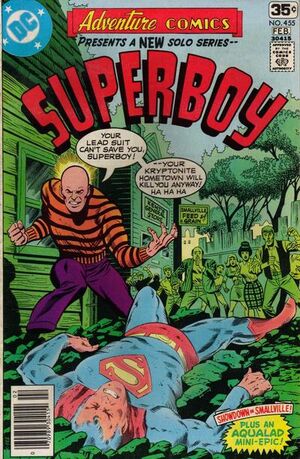 I thought I could never be a whole man without knowing my heritage! I know now I was never so wrong in my life... a man isn't measured by where he comes from, but by what he does with his life! And I've lead a good life -- I am my own man!

Lex Luthor takes over Smallville in Superboy’s absence. Superboy is weakened in the town of green-skinned people, but he eventually learns that Luthor has sent a satellite into space that screens out the sun’s yellow rays from Earth, thus weakening him. He destroys the satellite, returns Smallville and its citizens to normal, and easily defeats Luthor.

Aqualad finds a robot in a hidden cavern full of deadly weapons. The robot is armed with a ray-weapon and dealing out death to anything that crosses its path. He destroys the robot after a battle, and thus automatically triggers a video unit that warns him to flee and leave the weapons alone, and tells of their would-be user, King Thar. Thar had been king of the pacifists, but wished to lead them into a war of conquest. To stave that off, the Idylists killed him. But they let his wife Berra go, who was pregnant with Garth, the baby who would later become Aqualad. Aqualad realizes the Idylists held back the truth from him out of shame for their sin of killing Thar, and heads out to find Aquaman and explain what he has learned.

Retrieved from "https://heykidscomics.fandom.com/wiki/Adventure_Comics_Vol_1_455?oldid=1509410"
Community content is available under CC-BY-SA unless otherwise noted.