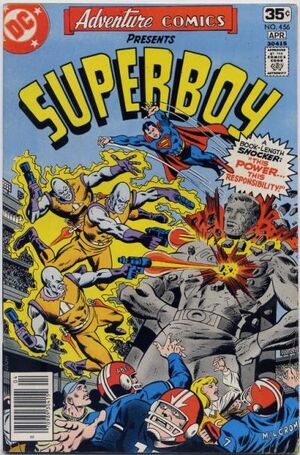 Two “thought explorers” from another world test Superboy with illusions of attackers. At one point, Superboy believes he has accidentally left Bash Bashford paralyzed, and, as a result, refuses to go into action in several later incidents. Finally, though, another imagined threat causes him to become the Boy of Steel again, and he discovers the truth behind the false images. Superboy throws the explorers’ spacecraft out of the galaxy, and Bash Bashford turns out not to be injured.

Retrieved from "https://heykidscomics.fandom.com/wiki/Adventure_Comics_Vol_1_456?oldid=1400075"
Community content is available under CC-BY-SA unless otherwise noted.