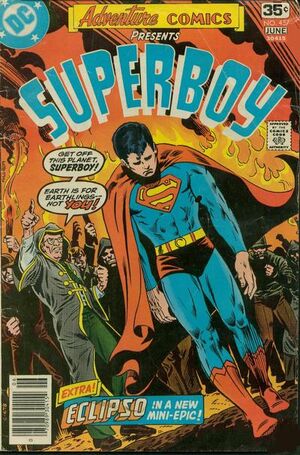 Appearing in "A Fire Within"Edit

Synopsis for "A Fire Within"Edit

Lester Wallace carries on a hate-campaign against Superboy due to his being an “alien”, at the same time that Superboy’s left side become immaterial and his strength begins to wane. He comes home one night to find his parents with Lester Wallace.

Appearing in "The Symbiont Syndrome"Edit

Synopsis for "The Symbiont Syndrome"Edit

Retrieved from "https://heykidscomics.fandom.com/wiki/Adventure_Comics_Vol_1_457?oldid=1695714"
Community content is available under CC-BY-SA unless otherwise noted.