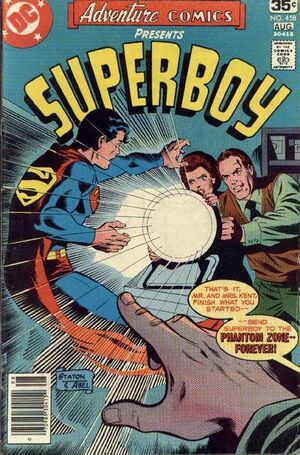 Appearing in "The Superboy Who Wasn't"Edit

Synopsis for "The Superboy Who Wasn't"Edit

Superboy is attacked by his parents, who are under Wallace’s mental control, who, in turn, is under the mental control of Zan-Em, a Phantom Zone prisoner. Wallace sends Superboy to the Zone, where he learns that Zan-Em has been having the Kents secretly dose him with Phantom Zone projector rays, which cause his partial immateriality. Zan-Em attempts an escape from the Zone, but Superboy escapes in his stead. Once out, he convinces Wallace to exile himself to the Phantom Zone.

Appearing in "He Who Survives!"Edit

Synopsis for "He Who Survives!"Edit

The Bennetts and Bruce Gordon fight to restore Eclipso to Gordon's body before he fades from existence.

Retrieved from "https://heykidscomics.fandom.com/wiki/Adventure_Comics_Vol_1_458?oldid=1695715"
Community content is available under CC-BY-SA unless otherwise noted.