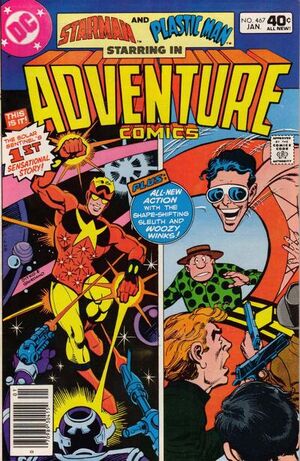 Thanks for savin' me the trouble of clobberin' those goons myself!

-- Woozy Winks, after Plastic Man saves him from a horde of hitmen

Plastic Man and Woozy Winks are assigned to bring in a syndicate informer for questioning, which becomes difficult when they learn the train in which they are transporting him is filled with hired killers.

Retrieved from "https://heykidscomics.fandom.com/wiki/Adventure_Comics_Vol_1_467?oldid=1400087"
Community content is available under CC-BY-SA unless otherwise noted.