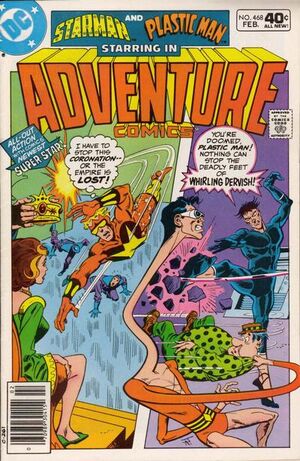 Just look at it this way -- it beats going to the dentist!

Appearing in "Uneasy Lies the Crown!"Edit

Synopsis for "Uneasy Lies the Crown!"Edit

Starman (Prince Gavyn) goes to Throneworld just in time for the coronation of The Empress of Throneworld. He finds that the evil Lord Protector Oswin and Lady Merria are the actual power behind the throne.

Plastic Man and Woozie Winks go to the ballet to follow up on a murder investigation. They find that ballet star Dimitri Dervish is actually Whirling Dervish - the killer! They apprehend him, and he confesses that he is actually working for a higher power.

This is the second appearance of Starman (Prince Gavyn).

Retrieved from "https://heykidscomics.fandom.com/wiki/Adventure_Comics_Vol_1_468?oldid=1400088"
Community content is available under CC-BY-SA unless otherwise noted.