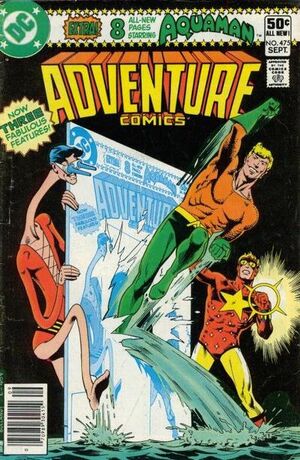 I know there are certain benighted souls who think I'm some kind of third-rate hero, Scavenger -- but I'd think that you of all people -- would know better! But since you seem a bit confused -- let me make this perfectly clear... I was in the world-saving game when people like Firestorm and Black Lightning were still in diapers... I've worked hard to earn the respect and trust of every living creature beneath the waves -- and I take my job very seriously... so get this through your head, punk... I'm Aquaman, King of the Seven Seas... and I'm the BEST!

Mera comes down with a disease that causes her high temperatures and delirium. Aquaman sets out for Atlantis, seeking Dr. Vulko. On the way, he is stopped by Topo the octopus, who takes him to the site of Atlena’s dimension-warping machinery. Unfortunately, the Scavenger is also on hand, and tries to steal it. After losing a battle to Aquaman, the Scavenger destroys the machine, rather than let his enemy have it. When Aquaman returns to his New Venice home, he finds that Mera has gone.

Appearing in "In Battle Joined!"Edit

Synopsis for "In Battle Joined!"Edit

Appearing in "Don't Get Mad, Get Even"Edit

Synopsis for "Don't Get Mad, Get Even"Edit

Retrieved from "https://heykidscomics.fandom.com/wiki/Adventure_Comics_Vol_1_475?oldid=1498265"
Community content is available under CC-BY-SA unless otherwise noted.