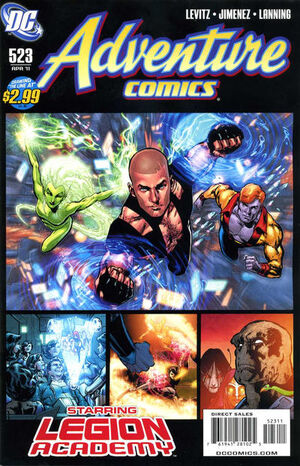 The strangest day of my life began with a strange shadow crossing our star, sending a message to my teacher. They asked permission to land, calling us the Sorcerers' World, and said they were here for me... to take me to... Legion Academy.

Glorith recounts to her friend Harlak, back on the Sorcerers' World, her coming of age tale of friendship, spiritual growth and becoming part of the Legion Academy. She is called upon to leave her adopted family, Black Witch and Blok, and join other Academy rookies as they learn to become heroes. Immediately, one of the young recruits, Chemical Kid, persuades his fellow teammates to break into a liquor store and have a late night party. This does not go over well with Academy teacher Duplicate Girl the next morning. None the less, the kids do the same break-in stunt again, but this time are caught by security and placed under arrest. To be continued next issue.

Retrieved from "https://heykidscomics.fandom.com/wiki/Adventure_Comics_Vol_1_523?oldid=1400131"
Community content is available under CC-BY-SA unless otherwise noted.