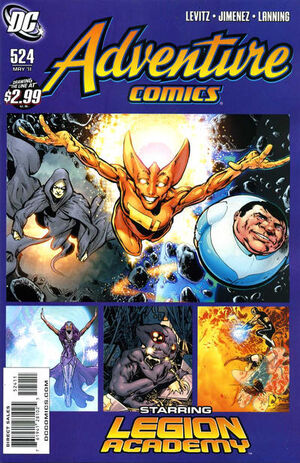 Cute. Next they'll send the subs. I'd be more annoyed by a shipload of Science Police... than you kiddies.

Glorith continues to recount to her friend Harlak, back on the Sorcerers' World, her coming of age tale of friendship, spiritual growth and becoming part of the Legion Academy. She, and other Academy recruits, recently broke into a liquor store to have a late night party. This did not go over well with Academy teacher Duplicate Girl the next morning. None the less, the kids do another midnight break-in, but this time are caught by security and placed under arrest. And, once again, Duplicate Girl is none to please with them as she angrily lectures them after pulling them out of jail. Though, even after her scolding and grounding them, Chemical Kid convinces some of his teammates to visit his planet Phlon. He believes his dad is in trouble. Upon their arrival, they enter Chemical Kid's family home only to find it in ruins. Inside, the Taurus Gang, led by Black Mace, are threatening the family and smashing the place apart. A battle ensues in order to rescue Chemical Kid's dad, but Chemical Kid's powers mysteriously extinguishes and the other heroes begin to quickly fall.

Meanwhile, other Legion Academy members are being prepared by Cosmic Boy to commence with their "finals." If they do not succeed, or for that matter, get killed, with the task at hand, they must leave the team. To be continued next issue.

Retrieved from "https://heykidscomics.fandom.com/wiki/Adventure_Comics_Vol_1_524?oldid=1400132"
Community content is available under CC-BY-SA unless otherwise noted.