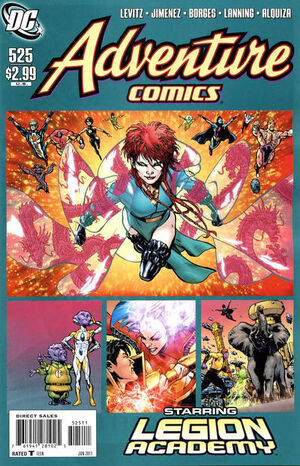 The magic of woman has always been holding life within, and by my ancestors, I will hold yours...

When Chemical Kid believes his dad is in trouble, he recruits his fellow teammates to visit his planet. Upon their arrival, they enter his family's home only to find it in ruins. Inside, the Taurus Gang, led by Black Mace, are smashing the place apart. A battle ensues in order to rescue Chemical Kid's dad, but Chemical Kid's powers mysteriously extinguishes and the other heroes begin to quickly fall. It seems another member of the villainous gang, Alchemical Girl, is draining their powers. Glorith unexpectedly gets an extra surge of power from her mentor Black Witch (who is off planet, but has a premonition her adopted daughter needs help). The tables are quickly turned, and the heroes subdue their opponents. Chemical Kid confronts his father, wondering why he gave away the secrets of the "the gene mod," which grants his son's powers. The answer is gambling debts, and the Black Mace wanted to create a whole "gene mod gang," starting with the creation of Alchemical Girl.

Meanwhile, other Legion Academy members are being prepared by Cosmic Boy to commence with their "finals." If they do not succeed, or for that matter, get killed, with the task at hand, they must leave the team. He, Night Girl, Lamprey and Power Boy head to a spaceport where the Organleggers are looting animals from a cargo ship. The two students stop the thieves, but not without some mishaps. The two are not Legion material and are instead recruited as security personal at Takron-Galtos.

Appearing in "The Darkness Within"Edit

Synopsis for "The Darkness Within"Edit

On Sorcerers' World, Black Witch receives a vision that her adopted daughter, Glorith, needs help. When she allows her to absorb an extra surge of magical power, Mordru becomes aware of an opportunity to waken and confront his capture, the Black Witch, who's kept him imprisoned underground for several years.

Science Police Officer Lieutenant Pozner is named after Neal Pozner. In 1991, Pozner, then DC's art director, recruited several new talents, one of them being Phil Jimenez.