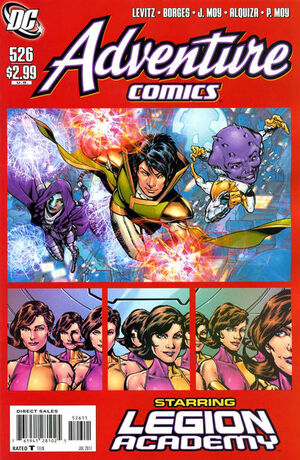 Wow. Whatever happened here left a lot of ghosts. That tasted of the speed force, and time barrier... and the ugliest soul I could ever imagine. Got what I came for. Outta here... and let the Legion worry about whatever came out of that crack that felt like it led straight to Hell.

Chemical Kid and his fellow teammates break into the University of Phlon to gather raw genes of Chemical King, which is kept inside a statue in memoriam of the fallen hero. They bring back an original characteristics gene mod to Glorith who uses it, and her magic, against a captured Alchemical Girl. Glorith is able to literally, rip out the gene mutations from Alchemical Girl's body and soul. Thus, succeeding in apprehending, and stopping, the entire Taurus Gang from continuing their gene-running experiments.

While searching for stones for her mosaic, XS is invited to become a teacher for the Legion Academy, but turns down the offer. Later, she finds the perfect gem for her art piece in the Olduvai Gorge. When she touches it, visions of her ancestry are released (Flashpoint). She realizes that perhaps a "speed force" and "time barrier" might have been affected with her taking the stone, but decides to let the Legion worry about any evil that may have risen from her actions.

Retrieved from "https://heykidscomics.fandom.com/wiki/Adventure_Comics_Vol_1_526?oldid=1400134"
Community content is available under CC-BY-SA unless otherwise noted.