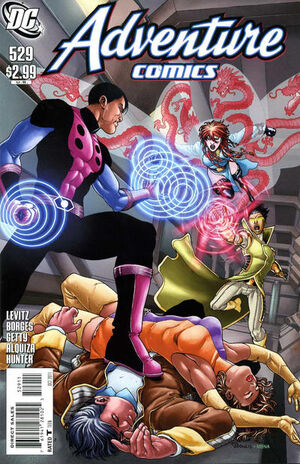 I have seen the great powers of the universe, sir... and you are none of them.

After breaking into Legion Headquarters and defeating the Legion Academy instructors, Cosmic King takes on the students of the Legion Academy. Variable Lad leaps into action, and not only kills the powerful foe, but himself too. After the battle, Gravity Kid quits the team to join the Science Police on Takron-Galtos.

Retrieved from "https://heykidscomics.fandom.com/wiki/Adventure_Comics_Vol_1_529?oldid=1400138"
Community content is available under CC-BY-SA unless otherwise noted.