Start a Wiki
Part of the 'Origins and Omens' event 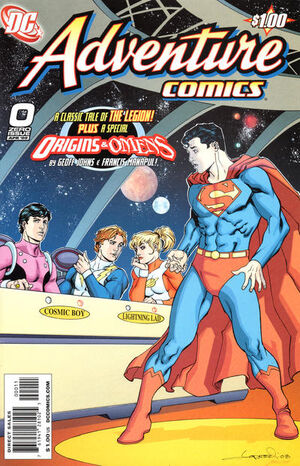 I serve the universe no more. I serve another force that has crept into my being and shown me the unfathomable power within the frigid vacuum of space. They hunger as he does. And this book—the Book of the Black—contains all who glow with the invisible light of sentient emotion.

Appearing in "The Legion of Super-Heroes"Edit

Synopsis for "The Legion of Super-Heroes"Edit

One day, Clark Kent is shocked when two young people identify him as Superboy, and later while out on patrol they find a girl who outs him as Clark Kent. Superboy is shocked when the three teenagers reveal themselves to be members of the Legion of Super-Heroes, a group of super-teens from the 30th Century. They introduce themselves as Cosmic Boy, Lightning Boy, and Saturn Girl, and they have come to the 20th Century to offer Superboy membership into the Legion.

Returning to his native 20th Century, Superboy shows off his medallion to Pa Kent, who congratulates the boy on his recent success.

Scar is seen with the Book of the Black open, watching over Lex Luthor in a lab, as Scar says he may facilitate a being that will disrupt their frenzy. It then cuts to Brainaic strapped to a mobile examination table as Lex Luthor is shown pushing it. Lex has control over Brainaic due to him tapping into Brainiac's Probes and Brainiac's Skull Ship. They encounter a few military guards and Lex deals with them via Brainiacs's powers. They finally arrive at Brainiac's Skull Ship, where Brainiac reveals the he was only letting Lex believe that he was controlling him; he just wanted go get back to his ship, whereas Lex saw it as an escape. Scar says the book makes no mention of Brainiac but there is another that Lex will have control over, but he is dead. A picture of Superboy (Conner Kent) is then depicted, with Scar narrating "I have witnessed the Book of the Black and questioned what it showed me." She finally says "The dead will save you, Lex."

Retrieved from "https://heykidscomics.fandom.com/wiki/Adventure_Comics_Vol_2_0?oldid=1497805"
Community content is available under CC-BY-SA unless otherwise noted.