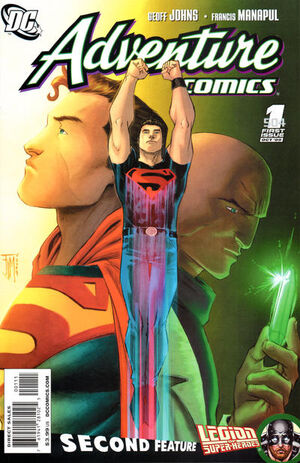 Appearing in "The Boy of Steel, Part One"Edit

Synopsis for "The Boy of Steel, Part One"Edit

The delusional Starman explains the origin of the Legion of Super-Heroes to a pigeon he calls "Bird Boy." He explains that he's a secret member of the Legion Espionage Squad, and there are several others hidden in the past to help save the world. Starman crashes into a bowling alley sign and decides to go bowling, which he believes is a 21st Century sport similar to jousting. He increases the density of the ball to Inertron levels, then throws it through the wall and screams "Touchdown." Starman crashes through the roof, grabs his ball and flies away shouting "Long live bowling!" In the swamp he finds Tellus, who senses his mental illness. Starman produces their battle plan, which he describes as "R.J. Brande's Last Will and Testament" or "Operation: Spin the Bottle." Tellus attempts to heal his broken mind, briefly returning Starman to sanity. Tellus apologizes that this is only temporary, as he did not realize the mental illness was rapidly progressing. Starman remembers everything, including the future and the upcoming war, then shouts that they must beware the Black Witch. He asks Tellus to help him get his true love Dream Girl back, because he needs her to save the future before his mind is completely gone.

Retrieved from "https://heykidscomics.fandom.com/wiki/Adventure_Comics_Vol_2_1?oldid=1670304"
Community content is available under CC-BY-SA unless otherwise noted.