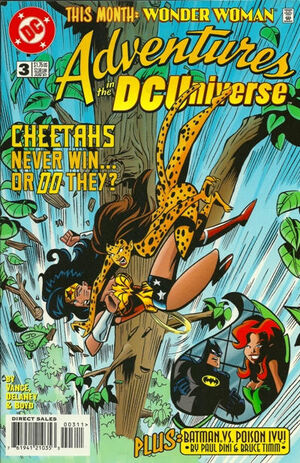 Another night, another costume party. On goes the mask, the suit, and all the accessories needed to make the illusion complete. That's me. The one wearing the tuxedo and the forced smile. Bruce Wayne: Billionaire, socialite, playboy.

Appearing in "You Can't Cheetah an Honest Man"Edit

Synopsis for "You Can't Cheetah an Honest Man"Edit

Appearing in "Cruise To Nightmare"Edit

Synopsis for "Cruise To Nightmare"Edit

Retrieved from "https://heykidscomics.fandom.com/wiki/Adventures_in_the_DC_Universe_Vol_1_3?oldid=1492037"
Community content is available under CC-BY-SA unless otherwise noted.