Adventures in the Rifle Brigade Vol 1 1 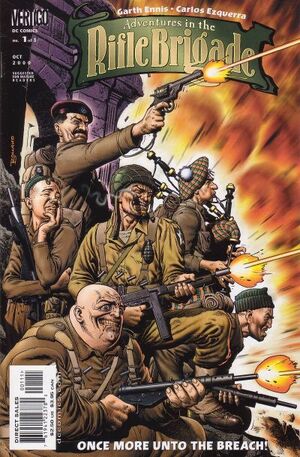 Appearing in "Once More Unto the Breach"Edit

Synopsis for "Once More Unto the Breach"Edit

It is June, 1944 the well known and reputed British commando unit the Rifle Brigade are assign in as of unknown, covert mission during a bombing mission over Berlin, Germany. The Brigade is led by Capt. Hugo "Khyber" Darcy, his Second Lieutenant Cecil "Doubtful" Milk, alleged largest man in England Sergeant Crumb, criminal-on-waiver Corporal Geezer, Hank the Yank (the only American in the team), and Darcy's taciturn Scottish servant The Piper. The Brigade, after being enthrall by Piper's bagpipes which caused a pilot to hear in agony, parachute down.

On the ground the Rifle Brigade ambush a group of drunken German soldiers and steal their uniforms for disguise (which goes noticeably to the readers). They are then confronted by a SS patrol who had heard their gunshots. The Brigade bluff their way and nearly goes without incident. Unfortunately, one of the SS soldiers sees through when he sees that Sergeant Crumbs' uniform Epaulette are incorrectly positioned. The Brigade quickly dispatch the SS and commandeer a Volkswagen.

Across town, illustrious Panzer Commander Oberst Flaschmann is having a night on the town with two beautiful ladies. He gives them a ride on his Panzer tank and rides across Berlin. Meanwhile, at the same time, the Rifle Brigade are lost in the city and inadvertently crash into Oberst Flaschmann's tank. Flaschmann recognizes them as Englishmen as they drive on the left and hold them up at gunpoint with his tank's cannon.

While taken prisoner, Doubtful Milk is fearful that they are likely to be shot as legitimate spies which he is corrected by the arrival of Hauptman Venkschaft, an officer of the Gestapo. Venkschaft tells the Rifle Brigade that they will be tortuously interrogate for British Intelligence on the "Second Front" (D-Day).