Adventures in the Rifle Brigade Vol 1 2 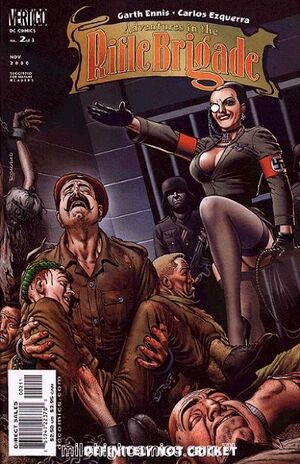 Appearing in "Definitely Not Cricket"Edit

Synopsis for "Definitely Not Cricket"Edit

Back at the cells, Gerta Gasch mocks the Rifle Brigade but only to be strongly refuted and undermine by Darcy when referring America as, according to Darcy, still a British colony (much to the irate of Hank the Yank). Gasch silences Darcy and tells him why she holds a deep grudge on him: in 1933, Hugo Darcy was leading in "The Great M'Boppo Elephant Hunt" in Gambia's M'Boppo Valley in which he indirectly killed Gerta's father when he chased the elephant into stampeding over the elder Gasch, who was masturbating in an outhouse with a set of pornographic postcards. Gerta was present at her father's death and watched Darcy galloping away without any second thought of what he done. After Gasch finished telling her story, a surprised Darcy admits to her that he didn't really see the elder Gasch when he chasing the elephant and that his death was an accident, but Gerta remains ever vengeful and decide to morally break him by having the Rifle Brigade broken. Starting with Doubtful Milk.

Sometime later, the Rifle Brigade (minus Milk) are free from their shackles by Sergeant Crumb and are again confronted by Gerta Gasch. A beat and weaken Milk is brought before them, which Darcy agonize over the Lieutenant from apparent internal bleeding until he realized he only suffered two broken teeth. Gerta Gasch laughs over this and shares her belief that Darcy's "stiff upper lip" is subtly homosexual in nature for attending public school. However, Darcy is unfazed and tells her that attending public school is part of the benefits of English restraint and that man-on-man love is "absolute twaddle". Darcy is then brought to be interrogate as he swears that he will not break.

Moments later, a very beaten Darcy is brought before his Brigade. Gerta Gasch forces Darcy to say "Hitler is my one true and rightful Fuhrer." But, Darcy defies her by singing "Hitler Has Only Got One Ball" along with his Brigade and every Allied prisoner, who hears their singing, within the prison. Darcy then tells Gasch that the Rifle Brigade will never be crush, stating that the Brigade and like its predecessors in the ancient past will always persevere in the end.

After Gasch left, Darcy ask Doubtful as to what were the Brigade's mission. Milk in turn is confuse, in which it is learn that a miscommunication between Milk and Darcy over telephone caused the Rifle Brigade going on a mistaken commando mission, in which it is nothing but a wild goose chase that cause their predicament. Much to the ire of the Rifle Brigade's revelation. They are then confronted by Hauptman Venkschaft, who wrongly suspects and reveal to the Brigade that they are attempting to destroy a secret V-2 rocket research laboratory which is right next to where they are imprisoned. Containing the single synthesizing fuel for the rockets which would destroy the Allied D-Day invasion. This catches Darcy's keen interest.