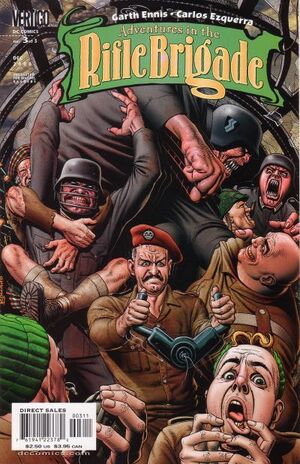 Appearing in "Up Yours, Fritz!"Edit

Synopsis for "Up Yours, Fritz!"Edit

Oberst Flaschmann has legal custody over the Rifle Brigade as a angry Hauptman Venkschaft reads over the legal papers. Flaschmann enters the Rifle Brigade's cell and announce of their humane transfer to a Prisoner of War camp, right after being photograph for propaganda purpose. As Flaschmann tells his generosity, Corporal Geezer pickpocket Flaschmann's pistol and gives it to Hugo Darcy. Darcy is gracious for Flaschmann's philanthropy and guns him down with his pistol, killing him. The Rifle Brigade in turn quickly subdues the guards and have Venkschaft taken hostage. After arming themselves Darcy lay out their plan in destroying the V-2 laboratory facility.

Later, the Rifle Brigade swiftly dispose the facility's guards and destroy the entire building before escaping. Venkschaft is left behind to be discover by his men. They then learn from a scientist that not only did the Rifle Brigade destroy every rocket fuel in the facility, but they had also stole the only copy of the formula. Venkschaft makes contact with Adolf Hitler in regard to the situation. But as Hitler mispronounce Venkschaft's name as "Wankshaft" (which was repeatedly said), Venkschaft goes berserk and vehemently chastise Hitler before realizing his grave mistake. Hitler punish him by having his rank strip and posted to a penal battalion in the Eastern Front. A soldier learns from the dictator that he is calling out the infamous "Jager X".

The Rifle Brigade drives to Berlin Airport and hijack a Heinkel He 111 bomber. Darcy makes contacts to London and notify their arrival. They are then follow by a Junker and see that they are being chased by Jager X, a team of German superhuman brutes who are more notorious than their Nazi masters. The Brigade battle Jager X and vigorously dispatches them one by one. The team are then escort by the arrival of American P-51 Mustangs and are on time to witness the start of D-Day. In an all-radio frequency, the Rifle Brigade sings "Hitler Has Only Got One Ball" before arriving home in England.

Retrieved from "https://heykidscomics.fandom.com/wiki/Adventures_in_the_Rifle_Brigade_Vol_1_3?oldid=1401015"
Community content is available under CC-BY-SA unless otherwise noted.