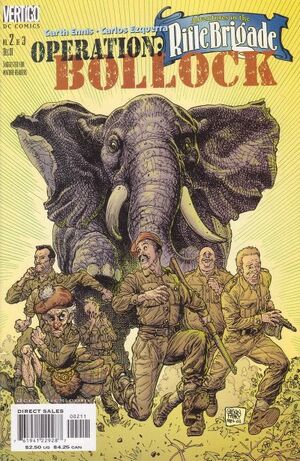 Appearing in "Operation Bollock: The Pearls of Arabia"Edit

Synopsis for "Operation Bollock: The Pearls of Arabia"Edit

The Rifle Brigade meet their liaison officer Carrington-Shyte of the F.O. Their liaison is albeit snide and unhelpful for their search of the bollock and the sultan who possesses it. As Darcy criticize his lazy attitude, Carrington-Shyte directs the Rifle Brigade to the sultan who is right behind them. The sultan Ali Ben Rajapoor Rashid O'Khan greets the men and acknowledge their search for the bollock which he invites them to a banquet he is throwing at his grand palace that he will discuss about the bollock.

As the sultan leave on his prized bull elephant, Darcy is deeply concern of how the Germans know they were coming as the Luftwaffe were repelled from the Middle East two years ago, and especially of how that German fighter plane knew where to intercept them. Darcy then orders Sergeant Crumb to bring up a vehicle that the embassy had gave them to have a drive around the city. He then notice that Carrington-Shyte has suddenly disappear. Suddenly a robed assassin jumps out and attempts to kill Darcy, who easily struck him down. Darcy's assassin is reveal to be a German due to swearing in his native tongue, who then immediately flees. The Rifle Brigade chases after him but only to be fire back by a German armored car which the assassin climbs into it and escape. Sergeant Crumb round up with their ride, a poorly rusted armored Rolls-Royce, and tries to chase after the German car. They passes Sultan O'Khan which their car attracted the attentions of the sultan's elephant; causing it to delay the Rifle Brigade's chase as it attempts to mate their car, mistaking it for a female elephant. The sultan's elephant suddenly dies from exhaustion and falls on the Rolls-Royce, which the Rifle Brigade quickly gets out. Unfortunately, the Brigade are attack again by same German plane as it attempts to gun them down. The Brigade takes cover in which Darcy defiantly stands in the Focke's fire which misses him and forced to retreat.

The Brigade returns to the embassy and dresses for the party hosted at the sultan's palace. There they meet American adventurer Maryland Smith, who is also looking for the bollock in the interests of the United States. Maryland Smith proves himself to be an self-embarrassing man which he self-inflict the loss of his right eye with his whip. Darcy shares his concerns with Carrington-Shyte as he is puzzle of how the Americans learn about the bollock which the latter only admits that he doesn't know how. The guests are usher to dinner which Sultan O'Khan laments the loss of his beloved elephant from the day's fiasco and offers his respect to it by dining its flesh: he offers the Rifle Brigade the "only tastiest portion." After the Brigade reluctantly ate their meal, O'Khan shows the bollock. The sultan explains to his guests that given his country's near poverty he plans on selling the bollock at the highest bidder. The sultan then brings out the women of his royal harem for entertainment. Lieutenant Milk then notice that the bollock is gone which Darcy spots one of the harem women running away with the bollock, forcing him and the Brigade to chase after her. Their chase lead them to the palace's dungeons where they are confronted at gunpoint by German soldiers led by their nemesis Gerta Gasch, who was disguised as one of the harem women, and has the intentions of finally ending the Rifle Brigade and return the bollock to Nazi Germany to win the war.

Retrieved from "https://heykidscomics.fandom.com/wiki/Adventures_in_the_Rifle_Brigade_Vol_2_2?oldid=1401017"
Community content is available under CC-BY-SA unless otherwise noted.