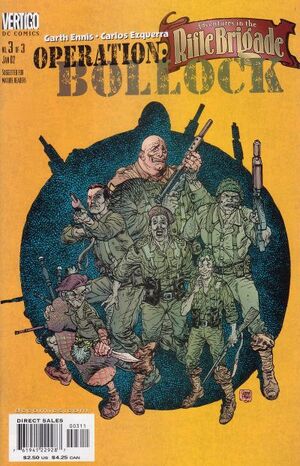 As the Rifle Brigade are held at gunpoint, Gerta Gasch laments her life after her last meeting with the Rifle Brigade left her humiliated and career over after their defiance which led her to volunteer to search for Hitler's bollock; only to subsequently made to serving three months of oral sex which she blamed this on the Brigade. Carrington-Shyte comes out the shadow and reveals to be a traitor to Britain, having been responsible for informing the Germans about the bollock, and Gasch's lover - much to the disgust of the Brigade. With the bollock in hand, Gerta explains that once the testicle is reunited with Hitler and allowing Germany to win the war within a month. Gasch and Carrington-Shyte leave the Rifle Brigade for them to be disarm and prepared to be sent to Germany.

Outside, as Gasch prepares to leave Semmen unnoticed for a plane until one of her officers informs her that they had disarmed the Brigade, but didn't apprehend Piper's bagpipes. As this being said, Piper plays his pipes which agonizingly kills the Brigade's handlers. The Brigade arms themselves and fights back Gasch's men. The Focke-Wulf 190 returns again - which is Gasch's ride, but only to be shot down by the Rifle Brigade. It's pilot parachutes out of his plane as the palace's guards and O'Khan are awake to the commotions. Maryland Smith appears on the scene on biplane and steals the bollock literally out of Gasch's hand. The Brigade are then confronted at gunpoint by the pilot of the Focke, who reveals himself to be Oberleutnant Ernst Flaschmann - the brother of the deceased Otto Flaschmann who was previously killed by Darcy. Flaschmann tells them that he came to search vengeance for his brother's death but now realizes his cause is meaningless as he, his brother, and the Brigade are soldiers who are fighting for the respective nations and should be treated with respect as fellow soldiers instead of enemies. However, Darcy shoots Flaschmann and finds his sentimental belief as "absolute rot." O'Khan and his men finds and arrest the Brigade, Gasch and Carrington-Shyte. Carrington-Shyte then reveals his true colors that he has no care for Gasch and see that he is diplomatically immune and plans to see Gasch and the Brigade executed as criminals.

Maryland Smith returns to the scene with the intention mooning his enemies. He then terrifyingly finds a badger - belonging to his pilot - inside his cockpit. Smith has a phobia of badgers in which he tries to shoot it, but only to hit the plane's fuel and causing it to explode, killing Smith and everyone on the plane. The bollock is drop from the plane and onto the ground where every party attempts to grab it in a fracas. Unexpectedly, the bollock lands inside Milk's mouth which he then inadvertently swallows it and succumbing to the malign influence of the bollock. Gasch then attempts to have her revenge on Darcy seeing that her mission to procure the bollock had been a farce. Suddenly, Milk violently vomit a torrent of black "man-fat" onto Gasch, Carrington-Shyte, and O'Khan - all whom wasted away into dusts. With their mission over, the Rifle Brigade leave for Britain.

In Blighty, Darcy reports to Colonel Frigpipe that after Lieutenant Milk was knocked out by Sergeant Crumb he has been recuperating and doesn't remember anything from swallowing the bollock. The bollock in turn is recovered. Darcy then ask Colonel Frigpipe as to what they would do with the bollock. Frigpipe only answers that he shouldn't be concern about the bollock and be content that another of England's enemies has been dealt a mortal blow.

The scene changes to Hitler's bollock being stored alongside a long rows of shelves holding bollocks belonging to Britain's historical enemies.

Retrieved from "https://heykidscomics.fandom.com/wiki/Adventures_in_the_Rifle_Brigade_Vol_2_3?oldid=1401018"
Community content is available under CC-BY-SA unless otherwise noted.