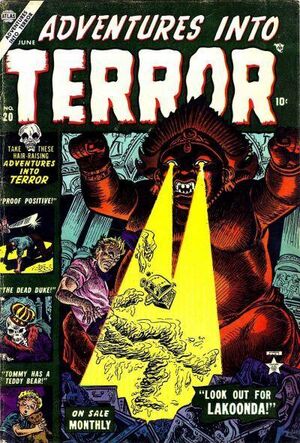 Appearing in "The Dead Duke"Edit

Synopsis for "The Dead Duke"Edit

The son of a French duke on the eve of the revolution in 1789 lives to regret arranging to have his elder brother murdered so that he can inherit the title.

Appearing in "Tommy Has a Teddy Bear"Edit

Synopsis for "Tommy Has a Teddy Bear"Edit

A small boy is kidnapped with his teddy bear who mauls the culprits.

A doctor claims that he has discovered a means of bringing back the dead but needs money to finish his research. When his license is revoked as a quack he starves to death and returns for vengeance on the doctor responsible.

Appearing in "We Can Hardly Wait"Edit

Synopsis for "We Can Hardly Wait"Edit

This story is narrated by worms at a freshly occupied gravesite.

Appearing in "Look Out for Lakoonda"Edit

Synopsis for "Look Out for Lakoonda"Edit

An explorer slays a cave monster guarding a treasure but finds himself transformed into the new guardian.

Retrieved from "https://heykidscomics.fandom.com/wiki/Adventures_into_Terror_Vol_2_20?oldid=1403077"
Community content is available under CC-BY-SA unless otherwise noted.