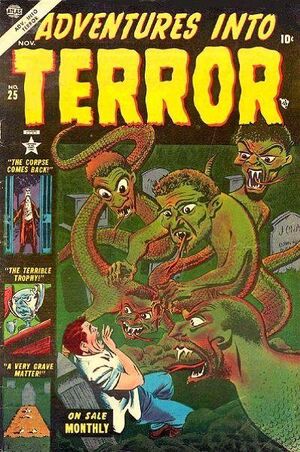 Appearing in "A Very Grave Matter!"Edit

Synopsis for "A Very Grave Matter!"Edit

A coffin maker who sells overpriced shoddy goods gets his just deserts when he buys a house from a man who stole the stone from cemeteries and the ghosts move in to haunt the new dwelling.

Appearing in "The Terrible Trophy"Edit

Synopsis for "The Terrible Trophy"Edit

A man who collects animal heads bores his club members with his bragging so they get a tattoo collector to remove the man's gorilla tattoo from his chest.

Appearing in "The Corpses Come Back!"Edit

Synopsis for "The Corpses Come Back!"Edit

A cemetery caretaker uses legalese to get out of caring for the graves which annoys the spirits of the departed. They visit him and force him to sign a contract promising to clean up the cemetery in return they agree not to come back as the caretaker has a weak heart and cannot stand the shock. He lives up to the contract but they return anyway to extract vengeance proclaiming that he did not read the contract's fine print.

A comic book artist's secret for speed is that he tricks other artists into being his slaves.

A man with snakes for fingers kills off his relatives in order to claim the inheritance.