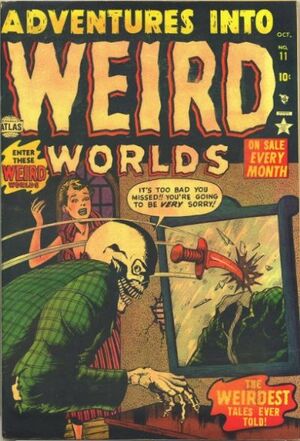 Appearing in "The Other Man"Edit

Synopsis for "The Other Man"Edit

A man duplicates a drug potion which will make him into an evil man like Mr. Hyde but what he doesn't realize is that the drug produces a Siamese-twin like growth on the opposite of his face so the police can easily identify him as the culprit in murder and gun him down.

Appearing in "Ghost in the House"Edit

Synopsis for "Ghost in the House"Edit

A skeptic present during a swami's performance is in for a shock when the swami and everyone else present turns out to be dead.

Two rivals in the northern woods are caught in an avalanche which pins them immobile, but unhurt. Each prays that their men will arrive first to finish off the other, but when they finally do hear approaching noise, it turns out to be a pack of hungry wolves.

Appearing in "The Dark Cave"Edit

Synopsis for "The Dark Cave"Edit

A scientist's wife plots with her lover to get the husband committed to a mental institution for seeing Martians since he believes he has constructed a device which will allow a Martian to teleport to Earth. The wife's lover doesn't believe the machine has a chance of working but he gets the wife to make him a Martian costume and fools the scientist into believing he has been visited. The scientist attempts to convince authorities but is taken away to the looney bin instead. The device actually does work though, and a blood-sucking Martian monster comes through to feast upon the unfortunate man's wife and lover.

A circus employee attempts to get rid of his rival, but makes the mistake of using a boomerang knife to do it.

Retrieved from "https://heykidscomics.fandom.com/wiki/Adventures_into_Weird_Worlds_Vol_1_11?oldid=1477148"
Community content is available under CC-BY-SA unless otherwise noted.