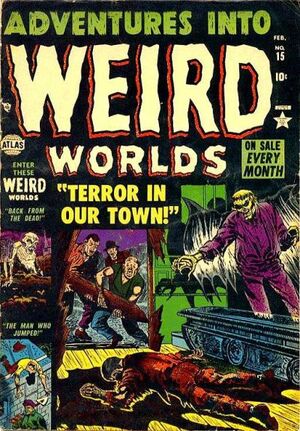 Appearing in "Terror in Town"Edit

Synopsis for "Terror in Town"Edit

Villagers jump to the conclusion that the creature created to battle vampires has gone mad after an electrical storm and begun killing when in fact it was the robot assistant the villagers had made their mayor that had been short-circuited by the storm and committed the murders.

Retrieved from "https://heykidscomics.fandom.com/wiki/Adventures_into_Weird_Worlds_Vol_1_15?oldid=1477152"
Community content is available under CC-BY-SA unless otherwise noted.