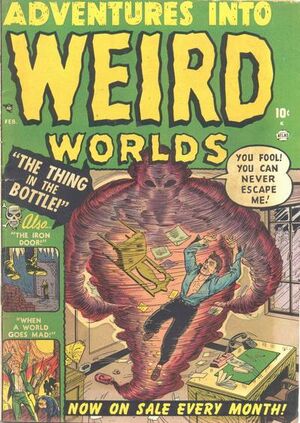 A man goes into a bar to call a friend for a job referral and drops his dime. Since he's broke, he looks around frantically but cannot locate it. One of the patrons sitting on a stool with his back to him says "Look under your foot." When he lifts his foot, there is the dime and he says "Without turning around, you must have eyes in the back of your head." The patrons become murderous in intent and pursue the frightened man out of the bar. He thinks about what he said and realizes that is why he never gets a break because there really are men with eyes in the back of their head which gives them an advantage. When he tells his friend this story in his apartment the friend kills him, because he too, has eyes in the back of his head.

Retrieved from "https://heykidscomics.fandom.com/wiki/Adventures_into_Weird_Worlds_Vol_1_2?oldid=1615787"
Community content is available under CC-BY-SA unless otherwise noted.