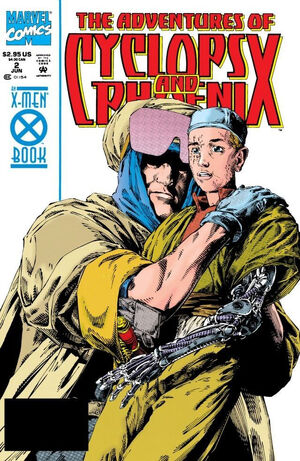 Five years after being pulled into the future by Mother Askani, Jean and Scott have assumed the names Slym and Redd Dayspring and they have begun a pilgrimage of sorts to a city called Crestcoast. Along the way they run into a stranger who overhears them speaking a suspicious olde English dialect and this stranger goes on his way to Crestcoast.

Meanwhile, Stryfe has begun his tutelage to focus his powers. He destroys a part of Apocalypse's citadel and Ch'Vayre chastises him. Apocalypse steps in and coddles the young boy. He tells Stryfe that he is to be his host and will be Apocalypse's heir.

Finally in Crestcoast, Redd, Slym and Nathan gather at the city gates. Some of Apocalypse's guards, Marl and Bolt see them walking to the gates and decide to start a fight with them. The stranger that they had met before warns the guards that they are lying about their allegiance to Apocalypse and this only causes the guards to get more angry. Slym readies to fight them when Prior Turrin comes forward and announces that they are guests and should be allowed entrance. The guards comply with his request of safe passage for the outsiders and allow them entrance to the city. They complain about having already primed their powers to use them and Turrin suggests they use them on the other stranger. Inside the city, Turrin announces to Redd and Slym that he has gotten their package they had forwarded to him there. As they walk through the city many dead bodies line the streets.

Retrieved from "https://heykidscomics.fandom.com/wiki/Adventures_of_Cyclops_and_Phoenix_Vol_1_2?oldid=1531128"
Community content is available under CC-BY-SA unless otherwise noted.