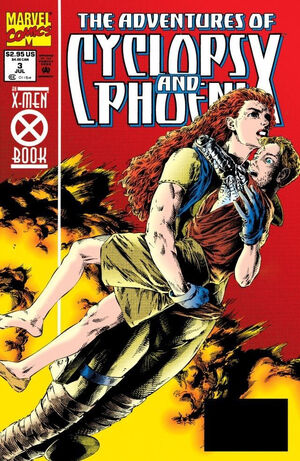 If that's your way of saying we're on an endless honeymoon, Prior - you're more accurate than you know.

Appearing in "Through the Years"Edit

Synopsis for "Through the Years"Edit

It has been 8 years since Cyclops and Jean Grey were brought into this alternate future by Rachel Summers. Jean, now named Redd trains Nathan Dayspring/Summers to hone his telekinetic powers to hide his cybernetic arm from public sight. He finally accomplishes this and after sneaking around he learns that Redd and Cyclops, now Slym, are actually involved in a band of rebels dubbed "Clan Rebellion". They are planning a raid on one of Apocalypse's strongholds that night.

Meanwhile, Ch'Vayre is seeing that Apocalypse is very close to his newly appointed heir, Stryfe. Apocalypse oversees him killing innocent humans to learn how to control his power. Ch'Vayre is disgusted by Stryfe's carelessness.

In the labs that the clan have raided, it is soon discovered that Apocalypse has engineered a virus very similar, if not identical to the "Legacy Virus" that has been unleashed on human/mutantkind in earth's current timeline. Redd and Slym learn they must destroy this technology. Before they can do this, Ch'Vayre and his soldiers appear. Nathan is seen to have followed the clan on this raid and he hides in a computer room where he begins to have a telepathic conversation with a voice named "Rachel". She teaches him of computers and how to set the labs to self-destruct. Stryfe finds him there and they realize they are clones of eachother. Stryfe uses his powers and gets knocked out. Nathan on the other hand also uses his powers and this allows the techno-organic virus in his body to take over and mangle his body. He finally gets it under control and Ch'Vayre takes Stryfe's body to Apocalypse's citadel to recover. The labs finally destruct as Skerrit, Turrin, Redd, Slym and Nathan all escape. Nathan tells them of his "talk" with a woman named Rachel.

Later, Slym goes to the bedside of Rachel, his daughter of another future, and thanks her for saving their family and helping out the cause. He tells her he knows her body is not awake but her mind is and that he loves her. Ch'Vayre is then seen contemplating the actions of Stryfe in battle and does not think he is a good heir to Apocalypse and thinks he should not allow Apocalypse to use him as a host body and he plots on how to keep that from happening.

Retrieved from "https://heykidscomics.fandom.com/wiki/Adventures_of_Cyclops_and_Phoenix_Vol_1_3?oldid=1531133"
Community content is available under CC-BY-SA unless otherwise noted.