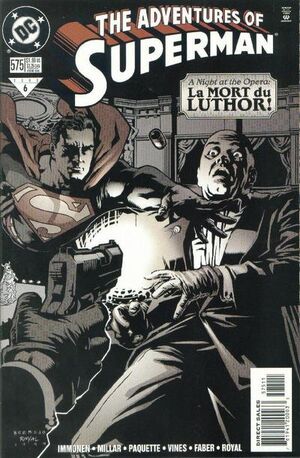 Appearing in "A Night at the Opera"Edit

Synopsis for "A Night at the Opera"Edit

As Superman flies over the Metropolis skyline, Lois, Lex Luthor and a worried stranger get ready for a night of culture. Lois soon gets caught up in traffic as she tries to make her way to the theatre. However, help is at hand in the form of Superman. Lifting the car up, Superman speed delivers Lois to the theatre car park. Clark is soon changed and the pair make their way into the opera house.

Inside the building, the couple are soon greeted by Lex Luthor himself. Lex showers Lois with compliments, which she casually dismisses. While Lex orders some drinks from a waiter, Lois points out that Don Giovanni is her favorite opera. Lex explains in that way that he does, that it was a coincidence. Clark steps in at this point, and congratulates Lex on his generosity of late, such as giving the Daily Planet back. When the drinks arrive, everyone has champagne, except for Clark who is given milk. As he drinks it, he tastes that it is odd. A quick scan with microscopic vision reveals the drink is laced with phosphate. Someone wants Clark to be going to the men's room all night.

The worried stranger, Mr. Hedegard arrives and asks Luthor if he wants to change his plans. Lex is very displeased at the suggestion and threatens him. Lex begins to move his guests inside for the performance, when Clark excuses himself. He quickly explains everything to Lois. In the box, Lex continues to flirt with Lois, even in front of Clark. Clark is determined to not leave Lex alone with his wife, when an emergency catches his attention.

In the city some cars crash as huge hailstones begin to fall from the sky. Superman comes to the rescue with his heat-vision.

Back at the opera house, Lex continues to chat up Lois while Superman continues to avert the disasters. Lex is about to have a disaster of his own - Mr. Hedegard suddenly pulls a gun and fires at Lex. But Luthor karate kicks the attacker and knocks him down so his bodyguards can do the rest. Clark suddenly arrives, and in his hand is a bullet.

On the way home, Lex thanks a Mr. Mardon, the Weather Wizard, for his help and promises him a large sum of money. Lex is then dropped off at the railway station where he meets up with Hedegard, where he tells him he nearly botched the job, and that he never wants to see him again.

High above Metropolis, Superman is giving Lois a ride home. He explains that the whole evening was set up to try and impress Lois, but Lois is only impressed by a certain mild mannered reporter.

Retrieved from "https://heykidscomics.fandom.com/wiki/Adventures_of_Superman_Vol_1_575?oldid=1406137"
Community content is available under CC-BY-SA unless otherwise noted.