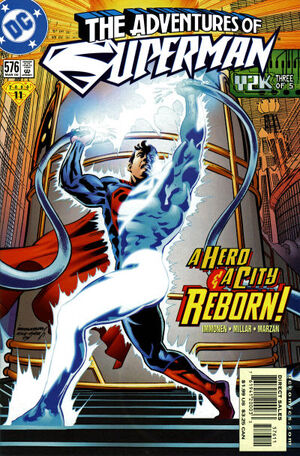 Brainiac 13 strikes the newly transformed Superman through a building down to the streets. As he regains his senses, he looks around at what used to be Metropolis. He gets to his feet and launches himself at Brainiac 13, punching him across the face. Brainiac 13 grabs the Man of Electricity and a huge explosion shakes the city.

In the LexCorp building, Lex Luthor and his now-talking daughter Lena make their way through the basement. Lena reveals herself to be, in reality, Brainiac 2.5's essence residing in her body. Brainiac 2.5 informs Luthor that he knows the location of the only piece of unaffected machinery in the city. They are suddenly forced to cut their conversation short and escape a group of Brainiac 13's attack droids. Lena's nanny is not so lucky.

In Metropolis General Hospital, Jimmy Olsen finds Ron Troupe. Lucy Lane is somewhere in the building, but the nanotech restructuring has remodeled the entire building.

Outside, Superman continues his battle with Brainiac 13. Again, Brainiac 13 grips Superman with his tendrils and Superman is linked to the city. Superman realizes the extent of the threat he is facing.

Meanwhile Lex meets up with his two bodyguards, Mercy and Hope, in LexCorp's basement. At the Metro General, Jimmy, Lois, and Ron finally locate Lucy.

Superman locates a speeding train hurtling through the city. He stands in front of the train, ready to stop it, but the train pushes right through him. Superman positions himself back in front of the train, determined to stop it before it strikes the building. But as he tries, Brainiac strikes again, seemingly finishing off Superman Blue. The train speeds toward the building, and then a tunnel forms in the structure, allowing passage.

Back at LexCorp, Lex later finds Superman's real body sitting in a chamber. Mercy and Hope break Superman out of his prison. Superman returns to life, but he has a long fight ahead of him.

Retrieved from "https://heykidscomics.fandom.com/wiki/Adventures_of_Superman_Vol_1_576?oldid=1406138"
Community content is available under CC-BY-SA unless otherwise noted.