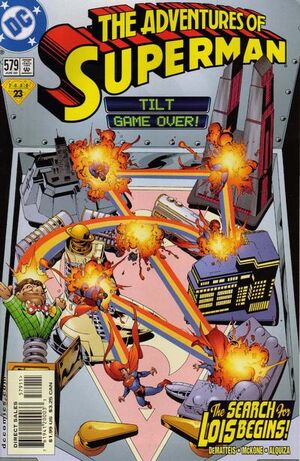 As Superman scours the city for his missing wife, Lex is busy watching him.

Down on the streets of Metropolis a large box is attracting a lot of attention. When Superman arrives, the box opens up and reveal to be a jack-in-a-box with a large toy of The Prankster as the Jack. Not wasting any time, Superman grabs the box and begins to take it way when he is attacked by a man in black. The box tumbles back down towards the ground, but Superman safely gathers it up. Disposing of it, Superman investigates the cigar smoking, man in black that attacked him. When Superman mentions Loomis (The Prankster), the man has no idea who he's talking about and introduces himself as The Adversary. When Superman chastises The Adversary for his foul language, the villain punches Superman and sends him crashing into Hob's Bay. Climbing back out, Superman searches for him, but to no avail. After a brief conversation with Jimmy, he carries on looking for Lois.

In his secret hide-away, the Prankster performs his old show to a group of robots and to riotous applause. Not everyone are robots though, he also has some technicians that he is able to control with nano-robots left over from Brainiac 13.

Superman flies through Lex Luthor's window, but instead of it shattering, it envelopes him like a bubble. Another left over from Brainiac 13. A touch of heat vision soon puts pay to the technology though, even if he is outside of LexCorp Tower. Shouting up at Luthor, he asks for Lois Lane.

Suddenly the words "Show Time" appear. It's The Prankster again and he's on top of the building. Using the nano-robots he takes over the security guards there who fall about laughing. When Superman arrives, The Prankster is setting up some kind of technology, and then tricks Superman so that he too is infected with the nano-robots. Soon the whole of Metropolis begins to uncontrollable laughter, even Superman. However, having a cunning plan, Superman whistles so that it matches the frequency of his brain. The nano-robot falls out of his ear and Superman destroys it. He then goes through saving Metropolis. He then heads home, just in time to receive guests.

Lucy Lane and Ron Troupe have some good news and have come round to Lois and Clark's to share it with them, even though they might be having a failing marriage. Clark appears at the door and pretends to have the flu and sends them away.

Later, Superman sits on top of a building and contemplates everything. Suddenly, he's attacked again by The Adversary. Just as suddenly the fight is over when The Adversary realises that Superman is ill.

At Metropolis Union Station, The Prankster strikes again by flooding it with green goo. The people inside are Loomis' robot audience, and while Superman takes care of them, Loomis escapes. The fire department arrives to clean up the green goo, but some is still left over in which Superman is glowing green.

Retrieved from "https://heykidscomics.fandom.com/wiki/Adventures_of_Superman_Vol_1_579?oldid=1406141"
Community content is available under CC-BY-SA unless otherwise noted.