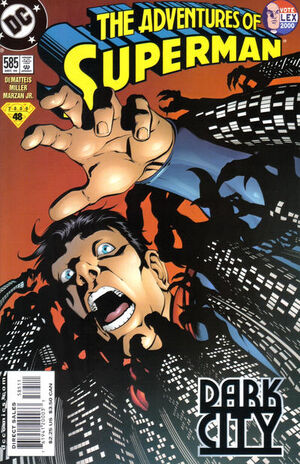 Kitty Faulkner, examining all of the B13 modifications on long nights and stretching days, is walking through the S.T.A.R. Labs facility when she notices a downed guard. She investigates, and is belted in the head by her angry alter ego, Rampage. Faulkner wonder how Rampage can deck her, as Kitty IS Rampage. Rampage knocks her out.

In Clark and Lois's apartment, they practice the ancient Kryptonian art of Torquasm Rao, a centering technique. Lois is failing, and getting frustrated. Suddenly, she's taken from her body on a psychic trip, where she sees a Metropolis under siege by shadow creatures. She returns to her body, and tells Clark.

Mr. Sleaze, Elton Jackson, is wandering down an alley when Thorn appears, and beats the tar out of him. He's been selling VR sex machines and abusing the young women who provide him the service.

Prankster comes down a ladder, seemingly from nowhere, and confronts Thorn. She remembers him, because he's the man who broke into Rose's apartment. Prankster ducks into the alley, changes into Steel's suit, and knocks Thorn out.

Superman goes out and looks for the shadow disturbance, and the world turns dark. Meanwhile, Lex Luthor rallies in Smallville on his last major stop. The Kents, in the crowd, liken it to the Nuremberg rallies. A kid named Cary is going to sleep late, having stayed up to watch the Luthor debates, when Adversary busts in cursing up a storm. He grabs the kid and flies off.

Superman is attacked by shadow creatures who are taken apart by white owls. An Indian woman appears in a white cloak and takes credit before disappearing.

The reason is then revealed where all of the alter-egos previously mentioned are revealed around a board room table with Lord Satanus.

Retrieved from "https://heykidscomics.fandom.com/wiki/Adventures_of_Superman_Vol_1_585?oldid=1406147"
Community content is available under CC-BY-SA unless otherwise noted.