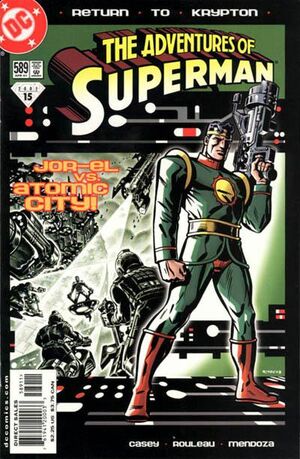 Superman floats in space, disoriented, perhaps unconscious, after putting his all his efforts into blasting Krypton out of an orbit that would lead it to certain doom.

Back in Kryptonopolis, Lois, Lara, And Jor-El observe this dilemma, and make haste to save the savior of Krypton. Lara gets into a rocket from Jor's lab and takes off to save Superman.

At a government facility, an unauthorized vehicle in space is detected. General Zod examines it menacingly as he utters Jor-El's name.

Superman is placed into a yellow goo, reminiscent of the Kryptonian Matrix regeneration chamber, and he is soon on a table, recovering. It seems that he's lost most of his power in the process of saving Krypton.

After Superman recovers, he and Lois enjoy the Fire Falls of Krypton, enjoying what seems to be Superman's first vacation. They move on to Atomic Town, a center of commerce, and later climbing Mt. Mundru.

Superman later speaks with Jor, as they talk of Kal's home planet. But Kal is very vague, only offering a description of potential. Jor-El thanks him.

n his lab, Jor-El works with a visual machine. Suddenly the walls implodes inward, and a pack of robots - Eradicators - attack, at Zod's command. During the attack, Lois is stunned by one of the robots. Superman, however, utilizing his bare hands, annihilates the Eradicators despite the loss of his powers and becoming bruised in the process. After destroying the Eradicators, Superman and Lois' belts that serves as a connection through the Phantom Zone are destroyed as well and preventing the couple from returning to Earth. Jor-El worries that now the council is after Superman and Lois, as well.

Retrieved from "https://heykidscomics.fandom.com/wiki/Adventures_of_Superman_Vol_1_589?oldid=1406151"
Community content is available under CC-BY-SA unless otherwise noted.