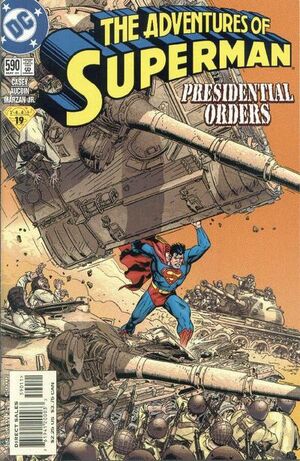 Appearing in "Don't Cry For Me, Bialya"Edit

Synopsis for "Don't Cry For Me, Bialya"Edit

In the Oval Office, President Luthor solemnly declares that the terrorist country Bialya has taken an American Journalist hostage. Superman stands facing Luthor, but questions what exactly Luthor wants. Lex assures him that he only seeks to bring home a captured American citizen. Superman agrees to accept the duty, but he does it for himself, not for Luthor.

In Bialya, a radar officer suddenly alerts his superior to the presence of an incoming flying object. The officer instructs them to shoot the object down, but is quickly informed that it is moving too fast. In the night skies Superman streaks toward Bialya's capital.

An American man lies forlornly on his cot inside a dank cell. Suddenly a deep voice permeates the cell. Andrew Finch, the journalist, obeys the voice and moves away from the wall. Superman comes crashing through a moment later. Superman and Finch converse briefly about the latter's mission there. He was supposed to meet with the leader Colonel Ehad Rajak, but they imprisoned him instead. Suddenly a group of soldiers breaks through the door. Superman blocks the hail of bullets and holds the troops back. Out of the corner of his eye he sees Finch deliver an expert blow across the face of one of the men.

Inside a bunker, Rajak orders ground troops to be deployed. He wishes to see just how far Superman will go to save this American. Sneaking out of the prison, Superman is met with a shell shot from a tank. Superman recovers his footing and proceeds to decimate the tank.

Rajak walks through his palace with an aide. The aide is suddenly knocked unconscious as a door is hurled from its hinges into his face. Behind the door, stands Superman. Rajak asks of his ground forces and Superman replies tersely. Outside, a pile of tanks smolder in the night. Superman tells him that he isn't working for any country, America or otherwise. He is merely rescuing a human being. Suddenly a group of soldiers breaks through the door, but Superman incapacitates them with his heat vision.

As Superman continues to speak to Rajak, Finch seizes his chance and takes a gun from the unconscious aide. He aims it at Rajak and pulls the trigger. Both are surprised as the bullets stop in midair and then crumple to the ground, caught by Superman. Finch's occupation as a journalist is his cover for his real mission, and even confronted with Superman's anger, he refuses to reveal who gave him his orders. After warning Rajak one last time, Superman and Finch head over the Atlantic. Once back in the country, Superman deposits the 'journalist' on the White House lawn at Luthor's feet.