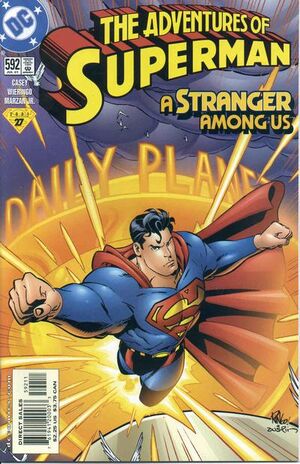 When Jimmy Olsen rigs his video game console to help him win at a hot new game, Lois and Clark warn him not to mess with B13 Technology. He learns his lesson when the sudden appearance of Strange Visitor causes his console to go haywire and he is sucked into the game!

Retrieved from "https://heykidscomics.fandom.com/wiki/Adventures_of_Superman_Vol_1_592?oldid=1406154"
Community content is available under CC-BY-SA unless otherwise noted.