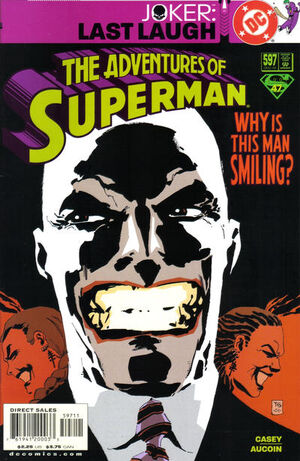 Lex Luthor is serenaded by Hope and Mercy in the White House, to his annoyance. He remarks that they bother him, and they are shown to be "Jokerized."

Meanwhile in Smallville, Clark and his parents visit the General Store. They view this as quite the blessing. On the television, however, chaos is erupting, as President Luthor seems to have begun his re-election campaign three years early. Clad in a purple and green suit, he demands submission and votes from everyone, including children. Pete Ross also watches with the Secret Service on television. Lex wipes his face, revealing a Joker white skin. Ross, alarmed by this, orders LexCorp-made battle suits after Lex's re-election campaign train.

At one of the train's stops, in Smallville, Clark is on sight, waiting for the train. When it passes without stopping, colored in Joker purple and green with American red, white, and blue, Clark takes off as Superman. He breaks into the train, tells Luthor that he isn't well, and prepares to take the President into captivity. Luthor, however, pulls out his nuke suitcase, pushes the button, and a Jokerized override operator at the silo allows the nuclear missiles to take off. Superman goes and grabs all of the missiles and throws them into the sun.

Back at the train, the battle suits arrive and Mercy and Hope. Superman arrives, and dispatches two of the three suits while Hope and Mercy take out the other. Pete Ross, after finding out that the President is incapacitated, orders the Joker killed. Damage control is already at work making it seem as if the President mixed cold medications.

Retrieved from "https://heykidscomics.fandom.com/wiki/Adventures_of_Superman_Vol_1_597?oldid=1406159"
Community content is available under CC-BY-SA unless otherwise noted.