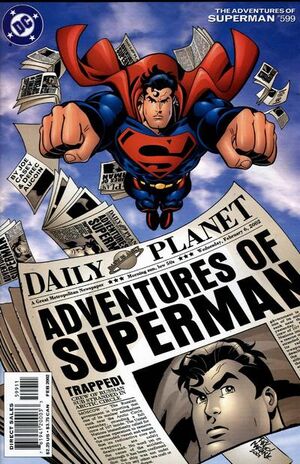 In the Barents Sea, an Oscar-II class submarine experiences a technical difficulty which causes it to sink, ever faster and faster, into the depths of the ocean.

Above, floating on the water, the Russian crews of aircraft carriers debate how to save the men, or whether to. But the arrival of Superman renders the point moot, raising the ship back to the surface.

Flashing to the present setting, in Avino, Russia, the captain of the vessel, Gussev, explains that his farm was never a part of the communist agenda. He also explains that as his wife has died, and his family, all interred on the farm, it is his turn to die as well. He experienced radiation on the ship, but the radiation didn't give him the cancer, a point he waxes upon as ironic. He laments that he will not see the harvest.

Superman grabs a number of tractors, promising Gussev that he will see the harvest. He harvests the field, and Gussev, tired, leads Superman inside. Superman confesses that he too grew up on a farm, and they agree that farmers don't see the world as divided, but rather united. Gussev dies. Superman buries him and flies off.

Retrieved from "https://heykidscomics.fandom.com/wiki/Adventures_of_Superman_Vol_1_599?oldid=1682907"
Community content is available under CC-BY-SA unless otherwise noted.