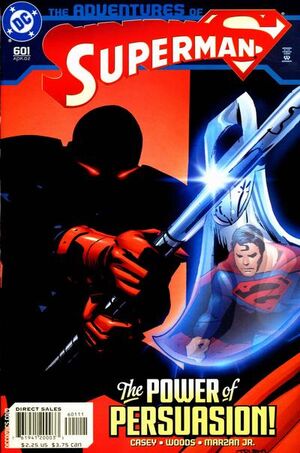 In his cell on Stryker's Island, Cole Parker sleeps dreaming of his first meeting with his cellmate and his futile battle with Superman. Jerking awake in his bed, Cole looks over to his cellmate to find his body exuding an image of a riot. With his eyes glowing, he tells Cole that he knows Cole has the ideas in his subconscious, but he hasn't yet made the leap to acting on it.

Inside Stryker's Island, Cole and his cellmate walk though the lunchroom, discussing the power that he is going to grant to Cole. And he is going to give it to him that night.

Flying across Metropolis, Clark lands in his apartment and presses the answering machine. He pauses when he hears Lois' voice. She tells him that she is having a great time with her mother, but the trip isn't really giving her the distance from him that she wanted. He can always hear her, and sometimes she wants him to stop listening and let her depend on herself for awhile. She closes the message by telling him that she loves him.

Inside his cell, Cole is awakened by his cellmate. He tosses Cole an axe and then brings his hands together, lightning flying from his fingertips. A lightning bolt flies across the cell bars, releasing all of the inmates from their confinement. As the former captives rush out of their cells and the prison guards quickly don their riot gear, the newly transfigured Cole swings his axe and blows a hole through the wall of his cell and into freedom.

The next day, a group of reporters surround the warden of Stryker's Island, asking questions about the previous night. He claims that the storm hit a transformer, causing the damage and releasing the inmates. However, no one was able to escape during the confusion. After the crowd breaks up, Clark and Jimmy Olsen head into the prison and enter the clerk's office. He had given Lois information earlier, and Jimmy hopes that he will again. Jimmy is in the midst of looking around his desk when the clerk suddenly returns. Clark tries to ask him some questions, but the clerk refuses to surrender any information. Looking down through the stack of papers the clerk is holding, Clark sees a classified report of Cole's escape. Taking Jimmy with him, Clark quickly heads out of the office.

Down in Suicide Slum, Cole's followers all meet in a darkened warehouse. None of them can explain it, but they all suddenly felt an urge to come down. Suddenly, a flash of light illuminates the gathered men. A huge silhouette of an axe-wielding figure towers before them, and tells them that this time everything will be different.

Inside the Daily Planet, Clark tells Perry White that while it is "unconfirmed," he heard that Cole Parker escaped and maybe Perry should be careful in the future. Perry begins to tell Clark that he won't be scared that easily, when a huge force shakes the entire building. Looking out the window, Jimmy admits his disbelief that it was a man that caused it.

At the base of the building, the Persuader, clad in body armor and swinging a huge axe, prepares to demolish another section of the Daily Planet with a swing of his axe.

Retrieved from "https://heykidscomics.fandom.com/wiki/Adventures_of_Superman_Vol_1_601?oldid=1406163"
Community content is available under CC-BY-SA unless otherwise noted.