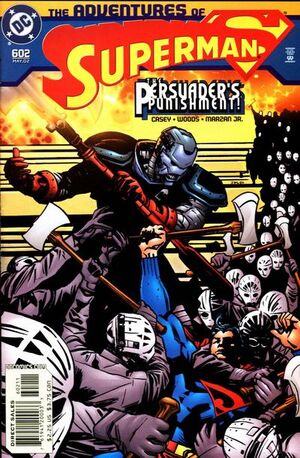 Inside the Daily Planet, people are awestruck at the man with the axe below trying to chop the building down. Clark says that he is off to check the other floors for damage, and Perry sends him off. Clark bursts to super-speed and takes off.

Below, seconds later, Superman confronts Persuader. Persuader insists, despite Superman calling him Cole, that Cole Parker is no more. He says, "Swarm", and the thousands of his army behind him attack Superman, who hadn't noticed them there before. Superman uses his super-breath to blow them all away for the police to round up. Persuader chides Superman, telling him that he may think he can stop him, but perhaps he can "persuade" Superman to think otherwise, by destroying the Daily Planet. Superman attacks, but Persuader, incredibly, knocks him into space.

Persuader uses his axe to chop the Daily Planet once, knocking a number of windows down in the process. Jimmy tries to get Perry to evacuate. He refuses, complaining that if no one stops Persuader, he will knock the building down. He also wonders where Kent went.

Persuader rants at the Daily Planet, claiming that one more blow will knock the building down. However, Superman plows into Persuader and knocks him all the way to Stryker's Island Penitentiary. There the two battle as Persuader, not fully comprehending the ability given to him, raises his axe and accidentally opens up a portal to old Krypton. Superman uses his heat vision to melt the ground beneath Persuader. Persuader falls over and disappears, leaving his axe and a shock wave (seemingly benign) that washes across Metropolis behind. Superman takes the axe to put in his fortress, leaving the warden to get the mess cleaned up.

Two weeks later, Lois is getting used to being back at work. Lois and Clark have a conversation, whichClark expresses his doubt that Lois is fully confident/in love with him, and she reassures him that she is.